Menhera
WARNING: This page discusses issues of mental health, which, although not graphic, may be triggering for some readers. Please read with caution.

Yami Kawaii is a sickly cute fashion that was derived from Yume Kawaii with a strong emphasis on sickness motifs. It is part of Anti-Kawaii which adds opposing elements to typical kawaii style in order to leave a greater impact. As the word yami means both "sick" and "dark", it revolves around not only medical but also dark themes related to mental health.

It is often confused with the Gurokawa trend, which revolves around horror and gore, but Yami Kawaii has a more girly spin to it with lots of anime-style illustrations, and is not bloody or gory. [1]

Yami Kawaii (病みかわいい) provokes two of the biggest taboo topics in Japan: depression and mental illness. The term is a portmanteau of the Japanese words for "sick" (病み) and "cute" (かわいい), and impresses with its combination of pastel colors and black. It particularly reflects serious issues in its motifs, and that is what makes it interesting for many. [2]

Mental health in Japan is still considered a taboo subject by many. It is seen as a weakness to discuss or receive medical help for mental illness. Yami Kawaii was created to bring such issues to light, and tries to remove the stigma surrounding them. It is also seen as a way for its wearers to express their own struggles with mental health issues. [3]

Yami Kawaii has similarities to both Yume Kawaii and the Creepy Cute trends that were popular around the mid-2010s. However, it has its own aspects that make it stand out as a distinct style. [1][3][4]

The color scheme of Yami Kawaii is similar to yume kawaii, with pastels, especially pastel pink, dominating the style. Darker colors, like black or red, can be used occasionally, but are much less prominent.

Yami Kawaii in fashion doesn't have many rules. The motifs of the clothing combine opposing things like cute looking text styles with depressive texts. For instance, a pastel pink shirt with bubble lettering will have a "yami" message, like “I want to die” or “Kill you." Images such as guns, pills referencing medication addictions, and other disturbing themes are common and have to be present in some form to make the outfit no longer simply kawaii, but Yami Kawaii.

Yami Kawaii accessories will often continue the offputting theme, with things such as bandages, skulls, pink blood, and gasmasks being popular. Sometimes these accessories may be a little darker, pointing more directly towards more dangerous aspects of struggling with mental illnesses. For instance, wearing a rope around the neck like a choker, or a syringe with dripping blood necklace, or gauze wrapped around a wrist.

There is a wide range of makeup style that can be worn within Yami Kawaii, but undereye blush, also known as byojaku, seems to be the most common. The sickly look of the red or pink eye makeup is further enhanced by drawing puffy eye bags. [5]

The original character and manga series "Menhera-chan" by Ezaki Bisuko in particular is credited to have helped the spread of Yami Kawaii. The development behind the whole thing was, as you can guess, not a particularly nice one.

Ezaki Bisuko's parents divorced when he was a child, from which he suffered all his childhood. During this time, he had to endure many insults and humiliations, which caused him to develop a mental illness. [6]

The story behind Menhera-chan is anything but beautiful, as she and her story were originally created by the artist as a form of vent art. The story follows a group of girls who transform into heroines of justice with a magical cutter in order to fight the evils of the world. [7]

The character of Menhera-chan is a young and pretty girl wearing a stereotypically "kawaii" pink sailor suit and pink twintails. She has a bunny friend named Usatan, the ears of which are designed to resemble medicine capsules. She also has two close and fairly like-minded friends, Sabukaru-chan and Yumekawa-chan, and the three together are called the Wrist Cut Warriors.

Through Menhera-chan and Bisuko, the supporters of this movement found a creative outlet. The content can be very questionable on the one hand, but on the other hand, it helps people to break the silence regarding their problems. He regularly receives messages from people that Yami Kawaii and Menhera-chan inspire them. [8]

Generally, although Yami Kawaii is meant to bring attention to mental illnesses, it is all done in good fun. It is often seen as a silly or light-hearted way to bring attention to a serious topic. The style is also seen as a way to empower those who feel they have been silenced on the topic, even though the topic itself may be hard to deal with. However, some who wear the fashion, especially those who claim the term menhera, can tend to place their mental illness as their sole identity, moving yami kawaii from just a fashion style, to an identity. [1][3]

Although most who wear the style do suffer from mental illnesses, not all do. Some, especially those in the international community, simply enjoy the aesthetics of the style.

Some have criticized yami kawaii for making mental illnesses "trendy" or something to be emulated, especially when it comes to popular figures who push the style. For instance, the band Zenbu Kimi no Sei da actively promotes the style, and their Yami Kawaii music discusses serious themes such as depression and suicide. However, others say it is simply a useful tool to share an important issue and usher in change. [9] 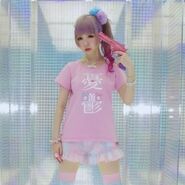 For more information on the term Menhera and how it relates to Yami Kawaii, please see:

Retrieved from "https://j-fashion.fandom.com/wiki/Yami_Kawaii?oldid=7354"
Community content is available under CC-BY-SA unless otherwise noted.