Takenokozoku refers to both a style and an activity. As a style, it refers to the brightly colored, baggy outfits worn by dancers that danced in the streets of Harajuku during the late 1970s and early 1980s.

The name "takenokozoku" translates to "bamboo shoot tribe", and is actually the name of the original dance group that started the trend of dancing in colorful costumes in the street. The style is mistakenly named this based on this group, although there was only one group that held the name. However, the term has now become so well known for the style and dance groups, that the name is now inseparable. [1]

The takenokozoku dancers appeared on the streets of Harajuku in the mid-1970s. Dressed in brightly colored baggy jumpsuits, the groups would dance distinct music styles played from boomboxes. Their dances show influences of traditional dances from Shinto festivals, as well as dance styles popular by the hippie/countercultural movement, as well as the disco movement, in the United States. Gradually, what began as one group spread, until large group dances were a common occurrence. [2]

Generally, these dancers would be mainly female, with a single male leader, and they would all dance in unison in the middle of the street. Their height of popularity was in the 1970s, but they continued through the 1980s, where boomboxes were replaced with trucks parking in the streets with loudspeakers, and eventually live bands. In 1992 such practices in the street were discouraged by the government, and so the style and culture mostly died out. [3]

Some say this style is a precursor to the Rockabilly and Gyaru styles, both of which also had a mass dancing movement attached to the fashion.

Although takenokozoku style had no rules, they nonetheless had a very distinct style that remained very consistent from group to group. [4]

The core of the takenokozoku style was the self-named "harem suit," a kind of jumpsuit with haram-like pants, and imitating Kimono or Chinese dress style. The materials of these suits were often gaudy and cheap materials, and the cut of the suits was extremely loose and almost shapeless.

Haram suits were always made in bright colors, with vivid red, pink and violet being especially popular.

The dancers in these groups not only wore a common style, but they also shared other character traits. They were often young, dissident, energetic and anti-establishment types, and clearly saw their style and dancing habits as a way of being counter-cultural.

A style or a costume?Edit

Although takenokozoku is often referred to as a style, the name may not be so accurate. In fact, the dancers who wore these styles did not wear them as an everyday thing. They would arrive at these dance performances in their regular, everyday clothing, and only change into the costume for the length of a performance, before going back to their everyday clothing once again. [5]

The main shop for Takenokozoku style was “Boutique Takenoko” (which translates to "Boutique Bamboo shoot"). The store opened in 1978, and many dancers bought their costumes there, or used their clothing as inspiration to make their own. The store remains open in Harajuku to this day, although it now sells modern clothing in the style of new alternative Japanese fashions. [6] 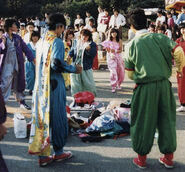 Retrieved from "https://j-fashion.fandom.com/wiki/Takenokozoku?oldid=5856"
Community content is available under CC-BY-SA unless otherwise noted.