Not to be confused with the magazine, Sukeban, that shares the same name, Sukeban is a style that has become a popular stereotype in anime and manga, and is known as the style of girl gangs from the 1960s to the 1980s. The style is focused on schoolgirl uniforms with a rebel twist.

Sukeban (スケバン/女番/スケ番) translates to "delinquent girl" or "boss girl" in Japanese. It is said to come from the word "ban" which is a shortened form of the word "bancho" used to describe the leader of male gangs, and "suke" meaning "girl." [1] The name describes the type of girls who created the style, rather than the style itself. [2]

Sukeban is a style that evolved from the everyday wear of delinquent girl gangs in the 1960s. As such, the style has close ties to everyday schoolgirl uniforms. [3]

The style remained a part of small girl gangs involved in various rebellious activities, until the 1970s, when the magazine Sukeban popularized the term. However, the magazine does not represent the style.

The 1970s saw the height of sukeban fashion, and girl gangs, as women sought to fight back against stereotypical misogynistic roles for women that were popular at the time. However, gangs were dangerous, creating toxic communities where leaving could result in serious consequences, and where members were expected and often required to break the law and engage in fights with other rival gangs. Drug use, violence, and theft were common. [4]

The connection to the schoolgirl uniform led to Sukeban being absorbed into kogal, gal, and gyaru in the 1980s, as the styles gained more popularity.

Nowadays, Sukeban is an inactive style, as girl gangs have fallen out of fashion. However, although it is an inactive style, Sukeban has gained a permanent place in pop culture. The style has been featured extensively in modern periods in anime and manga, and has become something of a stereotype. This widespread usage has contributed to a dumbing down of the style, making it more of a costume than an actual style. [5]

Sukeban style has no rules, and the style would vary from gang to gang. However, some aspects of the style were consistent across groups. [6]

Sukeban gangs all consisted of a schoolgirl uniform modified to fit the gang. Most often, these would be the members actual school uniforms. dressed themselves in customized school uniforms. They rolled up the sleeves, lengthened the skirt to the ankle, shortened the blouse. The uniforms usually had stitches of rose and kanji. and modifications of the school uniform such as wearing colored socks, rolling up the sleeves and lengthening the skirt.

There are no brands associated with sukeban. Instead, those who wear it often use their own school uniforms and modify them accordingly to fit the style. 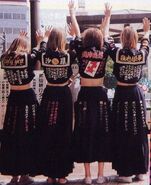 Retrieved from "https://j-fashion.fandom.com/wiki/Sukeban?oldid=5855"
Community content is available under CC-BY-SA unless otherwise noted.