Lolita Gal
Romanba is a substyle of gyaru similar to Ganguro or Manba, but with a romantic twist.

Romanba was a short-lived substyle. It contained the stereotypical gyaru silhouette and fashion, and included the tanned skin and white eye makeup of Ganguro, Manba, and Yamanba.

What set Romanba apart was its focus on "romantic" clothing aspects: meaning pinks, ruffles, and feminine frills. Due to its similarities to girly Lolita looks, it is also referred to as Lolita Gal.

The style never really caught on, and was quickly overshadowed by more popular girly styles, such as Lolita and Hime Gyaru. [1][2][3] 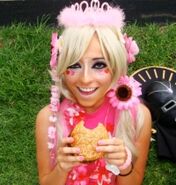 Retrieved from "https://j-fashion.fandom.com/wiki/Romanba?oldid=6847"
Community content is available under CC-BY-SA unless otherwise noted.