Pink House style, most commonly known as natural kei in the international community, is a style that focuses around the fashions created by the brand PINK HOUSE and the designer Kaneko Isao.

The name of Pink House style is somewhat convoluted. In international circles, the style is known exclusively as natural kei. However, this name is not used in Japan, and it is unsure where the name came from. [1]

In Japanese, this style is referred to as ピンクハウスコード（コーデ）or PINK HOUSE coord in English (meaning PINK HOUSE outfit/style), as well as ピンクハウスファッション or PINK HOUSE fashion in English. Additional names include カネコ福(コード、コーデ、ファッション) or Kaneko coord/fashion/style in English, a nod to one of the main designers of PINK HOUSE. [2]

Rumors have long circulated on the internet that the style functioned like other "kei" fashions, with a lifestyle, community, and aesthetic. However, these rumors are unsubstantiated. [3]

Pink House fashion was created formally in 1982 when the brand PINK HOUSE was launched in Japan. Although the brand's designers had been promoting a similar style throughout the 1970s, it wasn't until this time that it officially took off as a widespread fashion name.

PINK HOUSE still remains an active brand to this day, and recently had a collaboration with popular idol group Momoiro Clover Z in 2016. [4]

The basics of Pink House style are based entirely on the PINK HOUSE brand and other brands inspired by their style within Japan. As such, it has a very consistent look that has not changed much throughout the years. Newer modern pieces have been uploaded to their shops, especially the spin-off shops, but the main PINK HOUSE store has stayed fairly consistent with its original style. [5]

Color schemes in Pink House fashion are varied. Natural color palettes are popular, like browns and creams. However, pastels are also often used, as well as brighter colors, like mint green and bright red. Dark colors, like dark blues, can also be used. Outfits often also have one solid color that the entire ensemble revolves around.

Patterns are extremely prevalent in Pink House Style. Florals and nature-based patterns are the most popular. However, some outfits focus on block colors with no patterns.

Pink House clothing focuses primarily on layers, focused on the bottom of the outfit. Layered skirts are the most popular choice. The silhouette is almost always long skirts, with anything above the knee being almost unheard of. Occasionally bloomers are used for a sort of pants variant of the style, but this is not common.

Sweaters and blouses are popular choices for tops, as well as vests. Ruffles are prominent decorations on all aspects of Pink House fashion, and small details to each piece are also very important.

Popular shoes for natural kei are boots, sandals, and flats. Often shoes will match the color of the outfit coordinate, or will be in natural colors, like brown.

Straw hats and flowers in the hair are popular accessories. Straw baskets and totes are popular bag choices. Scarves and aprons are also commonly used.

Both hairstyles and makeup are kept rather natural in looks. Blush on the cheeks is popular for an innocent look, and natural hair colors and styles are most commonly used. 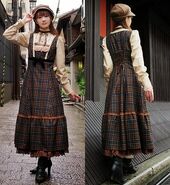 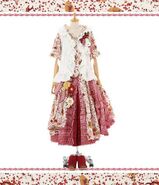 Retrieved from "https://j-fashion.fandom.com/wiki/Pink_House_Style?oldid=5850"
Community content is available under CC-BY-SA unless otherwise noted.