None
New Tora is a style that came out of the growth in wealth of both Kobe and Nagoya during the 1980s and 1990s. It focused on a style that emulated the rich-girl campus life. The style featured many international well-known luxury brands and emulated wealthy American fashion. After economic hard times in the 1990s, the style became less popular. [1][2]

New Tora is now considered an outdated term, and is no longer used to describe the fashion. However, many of the brands that came out of this area are still around, and produce similar fashion looks. However, the popularity of this as a mainstream style in Kobe, Nagoya, and other cities has dropped exponentially, leading this style to be considered inactive. [1]

New Tora is considered to be a part of the larger, Ametora movement.

New Tora comes from a shortening of the English "New Traditional" as pronounced in Japanese. The style name was termed by the popular magazine "an-an".

The style has many other names as well. For instance, the style saw popularity in Kobe, leading it to be known as Kobejou, or Kobe Kei. It also saw similar growth in Nagoya, leading to the names Nagoyajou, or Nagoya Kei. The term Hamatora came from a similar situation in Yokohama, and was coined by JJ magazine. Additionally, due to this magazine's influence on the style, some came to call the style JJ Sophia. [1]

The New Tora look is meant to emulate the look of a rich girl of around college age. Most of the women making New Tora (New Traditional) a fashion were also college girls themselves. The style was created and pushed by them, but JJ magazine codified the look, especially in Yokohama. [1][2]

New Tora featured a varied color palette. Due to it being a conservative style, it featured traditional colors such as navy and black. However, it also had a feminine side, and colors like pink were commonplace as well.

The signature New Tora look is best described as preppy. And as the style tried to emulate looks worn by students at the Ivy League schools in the United States at the time, it is no surprise they imported the preppy styles seen there back to Japan.

Sweater sets are a common look in New Tora. Overly adult looks were also popular, such as suit jackets and knee-length skirts. However, this could vary from city to city. For instance, Yokohama’s Hamatora was more childlike, with less of a focus on suits and more on plaids and sweaters.

The New Tora look, in seeking to emulate American Preppy and the Ivy League life, also promoted a lifestyle. Magazines during this time focused on various rich hobbies that rich college girls might engage in, such as tennis, skiing, and golfing.

Although New Tora is now no longer an active fashion, its' push for the "rich-girl" aesthetic influenced quite a few styles that came after it. Although these styles varied in their own clothing choices, and many are quite different from the signature New Tora style, there were all nonetheless influenced by its popularity and infatuation with emulating the lives of American and European rich and famous. [1]

An example of this is Akamojikei magazines, which were influenced by the New Tora movement. Hime Gyaru and Agejo are often thought to be influenced by this popular fashion as well. Some aspects of New Tora are popular with these fashions as well, such as Pucci prints in Agejo.

The Kobe Collection fashion show was also founded due to New Tora influence, and still functions to this day.

There were many brands founded in Japan at the time of the height of New Tora that still exist today. However, they no longer sell New Tora fashion, and have instead moved to new, more modern, trends and styles.

Many international brands were also popular staples of the style. 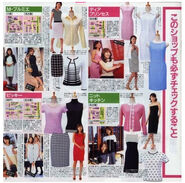 Retrieved from "https://j-fashion.fandom.com/wiki/New_Tora?oldid=6268"
Community content is available under CC-BY-SA unless otherwise noted.