Mote Kei is a style focused on looking appealing to the opposite sex and is generally a female-focused style. The style follows major brands and is broad due to this fact.

Mote kei is literally translated as Pretty-style, but more accurately translates as “attractive-style”. Mote Mote can also mean popular, and moteru (モテる) is used as slang meaning to appeal to the opposite sex. [1]

Mote Kei style is all about dressing pretty, with a defined goal of catching or keeping a date with goals of marriage. Although the term could be applied to men and women, in reality, it focuses on being attractive to men. [2]

Although mote kei is about being attractive, it is not necessarily about being "sexy," at least not in the traditional Western sense of the word. Instead of sex appeal, the style focuses on femininity. Although mote kei may show skin, it is small, calculated amounts. Overall, the style is more demure, sweet, and innocent, with just a bit of spice. [3]

Mote kei clothing often follows mass trends and popular fashion styles, so common themes can be very broad. The defining goal that remains the same is the "attractiveness" factor.

Generally, mote kei fashion is not loud, but instead seems approachable and comfortable. Styles are most often feminine, romantic, and sometimes retro. Although the style should be "cute" overly cutesy, or "kawaii" styles are not used, neither are overly sexy or flashy items. Instead, mote kei fashion should look not childlike, but also not quite adult either. Popular clothing fabrics are soft, comfortable and fuzzy. Knit items, like sweaters, are popular, as well as skirts, in both long and short lengths. Color palettes are generally neutral, although pastels are used too. [4]

Hairstyles that appear to be effortless and natural are popular in mote kei. Loose tendrils of hair, long soft waves, a longer bob, and other such hairstyles are popular.

Although mote kei can be an everyday style, mote kei is known for being most "appropriate" at "mote" times. Mote times are places like, weddings, dates, parties, and other formal events where you may meet with a potential date, or future spouse. [5]

However, although there are good times to wear mote kei, there is no mote kei lifestyle attached to the fashion. 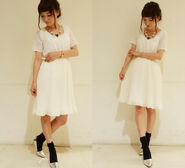 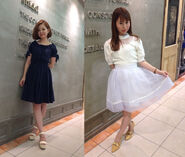 Retrieved from "https://j-fashion.fandom.com/wiki/Mote_Kei?oldid=5844"
Community content is available under CC-BY-SA unless otherwise noted.