Moru (盛る), Mori Gal
Mori Gyaru is a substyle of both gyaru and mori girl, and incorporates aspects of both styles. It is often confused with or overlaps with Bohemian Gyaru and Hime Gyaru. In fact, many Mori Gyaru outfits actually pass for, or are actually, other substyles. What sets the substyle apart is simply its naming and acceptance by the Mori community internationally.

Mori Gyaru has been called by many names. The original term, 森ギャル was coined in Popteen by Yui Kanno. [1] The term moru (盛る) was also used by Rin from Ageha. [2] The term was mainly accepted by International communities, however, as it faded into obscurity in the gal scene. [3]

Mori gyaru focuses on a natural twist to the traditional gyaru style. It incorporates the silhouette of gyaru with many of the natural fashion aspects of mori kei.

Mori gyaru's color schemes are natural tones, such as cream, light floral colors such as pink and blues, and browns. Clothing items are often draping and layered, with less of a focus on a sexy silhouette. Common materials are lace and cotton. Mori gyaru also includes lots of florals and ginghams.

Mori gyaru may have some traditional aspects of gyaru, but often tones them down. For instance, mori gyaru may have bigger hair styles, but they have more natural styles such as light waves and curls, or braids. Another example is the use of makeup in mori gyaru, but much less extreme than typical gyaru, and much more makeup used than mori kei's minimal makeup style. [3][4][5] 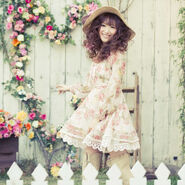 Retrieved from "https://j-fashion.fandom.com/wiki/Mori_Gyaru?oldid=6488"
Community content is available under CC-BY-SA unless otherwise noted.