Lolita fashion has many of its own unique subcultures based on the style, and thus what qualifies as Lolita style can vary greatly. However, the clothing is mainly inspired by Victorian and Rococo fashion. Lolita as a fashion is heavily influenced and supported by a large community subculture.

Despite the name, lolita fashion is not influenced by Nabokov's Lolita and is instead inspired by an elegant, cute and non-sexual ideal. It is also not considered a "doll" fashion, and as such many who wear Lolita find the term "doll-like" or "living doll" to be offensive. [1][2][3][4]

The style has a deep basis in historical fashion, as it draws its inspiration from Rococo and Victorian clothing. [1][2][3]

Lolita is one of the strictest of Japanese styles in regards to style guidelines, and as such as a number of conditions that exist for every Lolita substyle that make it constitute as "Lolita."[1][3][6]

Almost every outfit requires a petticoat in order to be considered lolita. There are some exceptions - both the Old School and Ero substyles may not always require them and salopettes do not always require one either. However, in almost all cases it is the petticoat that creates the signature Lolita silhouette.

Lolita outfits often require many pieces in order to be considered a lolita outfit. These items include main pieces (OP, JSK, or skirt), a blouse, headwear, petticoat and bloomers, legwear such as socks and tights, and shoes. Some items are not stressed to be as necessary as petticoats, but for the most part, are seen as necessary by a large part of the community.

Lolita also has many substyles with varying rules and common themes. Please see individual Substyles pages for more information on each style and microstyle.

Matching themes and colors are important to the lolita style. Many lolita pieces feature an item or a theme, and it is important to use those themes consistently while making an outfit. In some circles it is not wholly important to have all the colors match exactly, while other groups may disagree and view matching colors as exactly as possible as a must.

Lolita fashion is fairly modest when it comes to skin coverage and skirt length. Legs almost always require some form of legwear - tights, OTKs and other socks are very common. In most cases, dresses and skirts usually range between one inch above the knee to one length below, but this has not always been the case. Tea-length skirts, reaching mid-calve, have gained popularity in recent years. Angelic Pretty, as well as many other companies, have released many mid-thigh dresses and skirts in recent years, as well.

Hairstyles vary between each substyle, and can be natural or over-the-top depending on the outfit. Wigs are more popular over natural hair, but not required. Hairstyles that involve wavy or curly hair and blunt bangs are very popular for all substyles. Popular styles for lolita fashion over the years have included Hime-Cuts, Twintails and pastel-colored wigs.

Makeup varies between each substyle. For the most part, natural makeup is the most commonly worn. Styles like gothic lolita and ero can wear heavy and dark makeup that would normally be considered unacceptable in lolita. For OTT styles, heavier makeup is allowed. In styles such as sweet and deco, it is not unusual to see stickers, rhinestones or other items glued to the wearer's face.

Accessories are incredibly important to many lolita styles. Certain substyles are more reliant on accessories than others, but they are almost always worn in each outfit. Headbows and wristcuffs are both commonly paired with lolita. Jewelry is of heavy importance to this style. Many outfits are not considered complete without at least a small amount of jewelry paired with the outfit, although what type of jewelry is preferred will differ depending on the style.

The most popular style of shoes for lolita are Mary Janes, but there are many different shoes worn in the style. Most heels are low, but higher heels are sometimes seen. Chunky heels are a staple of Old School lolita. Rocking Horse Shoes gained incredible popularity in the early years of the fashion and are still worn today. Stilleto heels, sandals and open-toed shoes are rarely seen in lolita fashion and are sometimes seen as unacceptable in the fashion by some.

The three main substyles of Lolita fashion are classic, sweet, and gothic. But many various other substyles exist within the style that take a certain theme and create a unique take on the style that is all their own. To see the full list of these styles, visit substyles. [1][7] 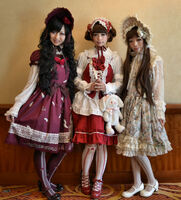 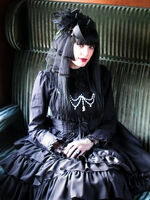 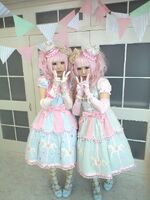 An example of both
OTT Sweet and Twinning 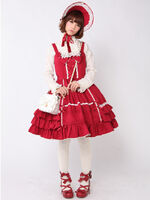 Old School Lolita
Add a photo to this gallery

Retrieved from "https://j-fashion.fandom.com/wiki/Lolita_Fashion?oldid=6880"
Community content is available under CC-BY-SA unless otherwise noted.