Kireime
Japanese Preppy is, as the name implies, a Japanese take on classic American Preppy style. Although the look seeks to emulate the American look, it did not take off as a style until after Japanese specific preppy brands began to market to Japan.

Japanese Preppy is part of the larger, Ametora umbrella.

Japanese Preppy has a self-explanatory name, taking its name from the American Preppy style. There is also a female-focused variant of the name, called joshi daisei (女子大生) meaning female college student. [1]

The Japanese Preppy style is greatly influenced, and almost a mimicry of, the American Preppy style. However, the Japanese version did not gain prominence with the rising of the trend overseas, but rather was basically created by Kensuke Ishizu. Ishizu attempted to build the style in the 1960s and 1970s, but was unsuccessful in helping the style catch on until the 1980s, when he launched his brand VANS. As such, he is created as the father of Japanese Preppy fashion. [2]

Although the style has existed in small communities since the creation of the style in America, it is not considered an active style until 1981 when it became a larger trend. The style is still active to this day in Japan, and although it is no longer a mass trend as it was in the 1980s, it still has a significant following and is a permanent part in the fashion scene, much as it is in America. [3][4]

The Japanese Preppy style borrows heavily from American preppy fashion, pulling extensively from American sources such as "Take Ivy,” “Ivy Illustrated,” and “The Official Preppy Handbook," which are all considered guides for the style in Japan and abroad. [3][4]

Newer Preppy styles may take inspiration from modern Japanese trends, but most tend to stick closely to the traditional, idealized style, as opposed to updating and changing it.

A substyle, or spin-off style, of Japanese Preppy is Trad Style (トラッドスタイル). It is considered a more mature version of the Ivy League inspired styles, and features suit jackets, knitted vests, collared shirts, plaid skirts and pants, leather shoes and bags, and occasionally hats such as news caps and berets. It also is a modest style, featuring longer skirt lengths and shirts buttoned all the way. [5] 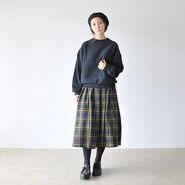 Japanese Preppy has had a large influence on fashion in Japan. For instance, the fashion magazine Cancam, founded in 1982 comes from this movement. The magazine is still active, although now it focuses on broader fashion themes, instead of only Preppy style. [6]

Of course, VAN is a major leader in the style, having been created by Kensuke Ishizu, the first to bring the style to Japan. 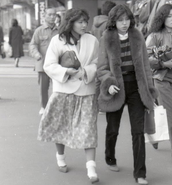 Retrieved from "https://j-fashion.fandom.com/wiki/Japanese_Preppy?oldid=7329"
Community content is available under CC-BY-SA unless otherwise noted.