Hama Girl, Umi Kei
Hama Kei is a sister style to Mori Girl, and is often considered a substyle of the fashion.

Hama kei saw a small amount of popularity during mori's height around 2012 to 2016. However, nowadays the style is almost completely inactive.

Hama Kei was based off a small sub-idea shown in some magazines and by some brands that featured mori outfits with a beachy twist. The style was picked up by the western mori community who then began using the name Hama Kei to describe the style. It became a popular topic amongst international groups, but never became a full fledged style. [1]

The style is very similar to mori, with a focus on natural fabrics and colors, lace, and layers. However, it does have some aspects that are unique.

For one, hama kei color palettes may be traditionally mori, in whites and creams, but are more often in ocean colors. Dark and light blues are commonly used as central colors to a coordinate, as well as being used to highlight an outfit. Reds and browns are also often used.

Thirdly, although the style does focus on a natural look and layering, hama kei layering is often much more minimal than in mori. For instance, some outfits will consist of only a shirt, skirt, and maybe a shawl. Some outfits may also be heavily focused on layering, but it is not required in hama kei. [2][3] 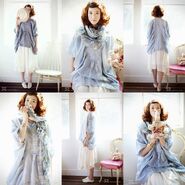 Retrieved from "https://j-fashion.fandom.com/wiki/Hama_Kei?oldid=7322"
Community content is available under CC-BY-SA unless otherwise noted.