Genderless Kei is a self-described genderless fashion style for both men and women, however, it is most popular among men or male presenting individuals. [1] The style grew quickly in popularity after genderless models appeared in the popular Tokyo Girls Collection 2015 Autumn/Winter fashion show. [2]

ジェンダーレス系 (Genderless Kei) or simply ジェンダーレス” (Genderless) is simply a term that describes the androgynous look of the style. There is a male-only term that is also sometimes used to describe the style, Neo-Ikemen, or new handsome boys. [3]

Genderless kei is influenced by general trends in Asian fashion towards "pretty" clothing for all genders, as well as by feminine men and masculine women characters in manga and anime. [4] The style is also considered a push back on long-held conservative cultural beliefs about gender roles and sexuality.

The actual style of genderless kei is very broad, with no real style rules, save creating an androgynous look. [5]

Popular aspects of genderless kei include using fashion aspects usually reserved for the other gender to create an androgynous look. For instance, for some men, this would include splashes of flamboyant pinks and a pair of traditionally feminine platform shoes. Sometimes, outfits will be more extreme, such as those that resemble cross-dressing, like wearing feminine styles or dresses for men. For women, an example might be wearing a suit jacket. However, any blend of style works for any person of any identity, and looks can include many different variations of these themes.

Dyed hair in unnatural colors is very popular in genderless kei. Hairstyles also tend to be androgynous as well. Although sometimes traditional hairstyles and hair colors may be used.

The classic genderless kei appearance is slim-bodied and cute-faced boys, or a boxy look for women to avoid curves. Makeup and colored contact lenses, dewy white skin, and pouting cherry lips are also used commonly across the style for all who wear it.

Sometimes outfits look similar to already existing kawaii styles, and it is hard to tell if the intent behind it is genderless or not. It is the intent that makes things genderless more than the fashion.

"Is this related to sexuality?" Edit

Genderless kei is not directly related to sexuality or gender identity. Most who wear the style actually identify as straight. There are some who identify as gay or non-binary, however, this is not the majority. The style isn’t about attempting to ‘pass’ as a woman or make a statement about sexuality. Instead, it is meant to reject the idea that clothing must be gendered. [6]

Some conservative Japanese people are against this genderless trend. They say that this style is cowardly or unnatural. Recently, the term "herbivore males" (soshoku danshi) was created to describe this group negatively, and accuse them of being cowardly and vain. Interestingly enough, this criticism has primarily been towards men, but not women. [7]

Although some hope this style will help to break down these barriers and prove this criticism unnecessary and wrong, the style is too new to say what lasting effect it will have on Japanese society.

Genderless kei is not based on shops or brands, but rather models, singers, and other various personalities in Harajuku and on Instagram who are creating the style. [8] 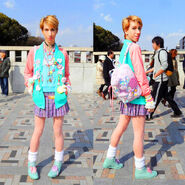 Retrieved from "https://j-fashion.fandom.com/wiki/Genderless_Kei?oldid=5832"
Community content is available under CC-BY-SA unless otherwise noted.