Ganguro is a substyle of gyaru.

Ganguro is one of the most extreme substyles of gyaru. It features the classic gyaru silhouette but adds in extreme tanning, bright white makeup around the eyes, light-colored lipstick, and bright, often neon, colored clothing. Extremely blond died hair is also popular in the style. The substyle also often exaggerates classic gyaru features, such as extremely long nails decorated with many charms.

Ganguro has occasionally been accused of being racist, due to its similarities to blackface. However, no connection between blackface and ganguro has been officially made. [1] With the style now having fallen out of popularity, criticism has faded along with the style. [2]

Some small variations of the style exist in the form of Manba, Banba, and Yamanba, but all died out rather quickly. All styles still carry core aspects of ganguro style, and very in rather small ways. [3]

Yamanba and manba are distinct from one another in their style of makeup. Yamanba involves white make-up only above the eye, while manba makeup is applied below the eye also.

Both styles added stickers on the face, hibiscus flowers, leis, and more accessories to the style, while still holding true to ganguro style concepts.

Banba is a more toned down version of Ganguro, with lighter tans, lighter white makeup around the eyes, and more mainstream fashion choices.

Kuro Gyaru is another substyle of Ganguro. The style still features the big hair and deep tans of Ganguro and similar styles, but uses more minimal makeup and more mature clothing. It is often considered a more "grown-up" version of Ganguro. The style is popular among many members of the famous gyaru group, Black Diamond. [4] 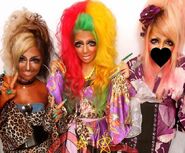 Retrieved from "https://j-fashion.fandom.com/wiki/Ganguro?oldid=5818"
Community content is available under CC-BY-SA unless otherwise noted.