Dark Mori, originally known as Black Forest Mori, is a substyle of Mori Girl. Primarily, the style is worn in a feminine way, although some more masculine coordinates can be seen as well. [1][2]

Unlike other Japanese fashion substyles that were created in Japan, dark mori was created and worn almost entirely by international adherents to the style. However, the style would not exist without mori kei, as it pulls directly from the main aspects of the style, only changing its color palette.

Dark mori was never really seen in Harajuku or on Japanese mori forums. In fact, the style was most likely created by tumblr user shortcuttothestars, although its exact origins cannot be confirmed. The international community sought to create a darker version of the lighter style, as many fashion styles, such as Lolita and Decora, often did in Japan. The substyle remains active in international communities until this day.[1][2]

The style is almost identical to traditional mori kei, save for its darker color scheme. It features primarily black and grey outifts, although colors such as dark blues, dark reds, dark browns, and white are also used.

The style contains the classic features of mori kei, such as layering, use of natural fabrics, and lace. It is often confused with the western style of Strega, a dark witchy style, due to some similarities. However, while dark mori could fall under the category of Strega, the style of Strega is much broader and contains many non-mori elements, setting the two styles apart.[3][4][5] 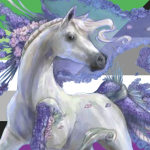