Cosplay Lolita is a combination of Cosplay and Lolita fashion.

Cosplay lolita incorporates two separate types of styles. One, the most popular, is creating actual lolita coordinates subtly inspired by various characters. For instance, including a color scheme of an anime character, or symbolism from a favorite show.

The other version of cosplay lolita includes wearing "lolita" outfits seen in anime, or modifying a character's outfit to make it into a lolita outfit.

Most consider cosplay lolita to be ita, as it often poorly translates aspects of lolita fashion and is worn by those who don't understand the style well. However, some lolitas do wear casual cosplays from time to time and enjoy the style. [1][2] 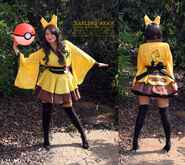 Doctor Who lolita cosplay
Add a photo to this gallery

Retrieved from "https://j-fashion.fandom.com/wiki/Cosplay_Lolita?oldid=7229"
Community content is available under CC-BY-SA unless otherwise noted.