Bohemian Gyaru is a microstyle of gyaru and the larger bohemian worldwide trend. It is often confused with, or combined with, Mori Gyaru. Although images of the style exist, it's Japanese title, if any, is unknown. It may be that this microstyle was only named internationally, and instead existed as simply a trend with the larger Gyaru umbrella.

This style is also occasionally referred to as "saike" gyaru in international circles, a title that has also been used within Japan to describe a futuristic style of gyaru opposite to the style.

Bohemian gyaru is considered a "one-off" fashion by most gyaru, and never saw much success in the mainstream. However, the style is still occasionally worn by some.

Although no magazines catered to this style, occasionally street snaps and images of the style would pop up across magazines catering to Gyaru fashion. One specific example is EGG.[2] 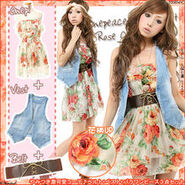 Retrieved from "https://j-fashion.fandom.com/wiki/Bohemian_Gyaru?oldid=7219"
Community content is available under CC-BY-SA unless otherwise noted.