Bodikon is a style centered around the distinctive style of dress by the same name, bodycon. The style was most popular in the late 1980s and very early 1990s. [1]

Although bodycon dresses still exist, the widespread fashion movement centered around the style is now considered inactive within Japan.

Bodikon can be considered a part of the larger Ametora umbrella, although it is not as directly related as other fashion styles. [2]

The name bodikon ( ボディコン) comes from a shortening of the pronunciation of the English words "body conscious" in Japanese, and describes the tighter fitting, more form-fitting dresses that dominate the style. [3]

The bodikon style at its core centers only around one aspect, the inclusion of a bodycon dress. However, there are common themes that were prevalent in the style over the years.

The more prevalent version of bodikon was less sexy and more conservative, everyday wear. This version of the style featured one-color dressing or outfits centered around one shade of color, popular in the 1980s. It, of course, featured a bodycon dress with a slim waist and tighter to the leg as the center of the outfit, and mid-level pumps were a popular accompanying shoe. Clutches and suit jackets were popular accessories to the outfit. One line hair was also popular with the style, meaning hair cut all one length with no layers. [4]

A sexy version of the bodikon style existed alongside the conservative, everyday version. This version was most popular within the club scene, and was made popular by Tokyo's club Juliana’s (ジュリアナ東京) that was open from 1991 to 1994. [2][5]

The sexy style featured miniskirts and spandex, as well as extremely tight bodycon dresses with very short hemlines and often cut with revealing sections. String bikinis and gogo boots were also added to the style, and were worn by bodikon dancers in clubs. Styles were sometimes extreme, and not appropriate for outside wear.

Natsuki Okamoto, a race girl, helped to popularize this sexy version of the bodycon look, and even added her own touch to the style with the “high-leg” look, which was a bathing suit cut to reveal all the thigh and hip. [1]

Due to its connection to club life, disco dancing, gogo dancers, and club dancing were popular with many who wore the style. [2] However, the activity was by no means required as part of the style, and many who wore the fashion as an everyday style were not active in the club scene.

There are no particular brands associated with bodikon. However, Hervé Leger, a French brand, was responsible for creating the first bodycon style dress. [2] 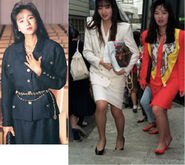 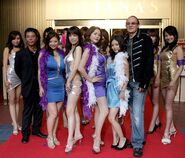 Retrieved from "https://j-fashion.fandom.com/wiki/Bodikon?oldid=7215"
Community content is available under CC-BY-SA unless otherwise noted.