Ane Gyaru is a rebellious substyle of gyaru.

Ane gyaru is a more dark and rebellious gyaru substyle. It focuses on darker color palettes such as black. Dark greys are also popular.

Ane gyaru is similar to the traditional gyaru style, with short skirts and fashionable items. However, it will often also throw in more goth or rock items, such as studs or leather.

The style is also commonly seen accompanied by piercings, such as lip piercings, and tattoos, as well as other "rebellious" fashion statements like ripped jeans.

Tans are less common in this style, and more mature, natural hair colors are most often used, as well as more simple gyaru makeup styles.[1][2][3] 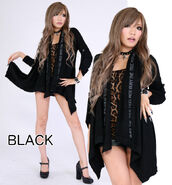 Retrieved from "https://j-fashion.fandom.com/wiki/Ane_Gyaru?oldid=7208"
Community content is available under CC-BY-SA unless otherwise noted.