Agejo is a substyle of gyaru. It was influenced by the magazine, Koakuma Ageha, which gave it its name. [1][2]

Agejo is usually worn only by hostesses in clubs, or mature gyaru from older gyaru crowds. Although it was once highly active, it is now a smaller substyle.

Agejo is very similar to classic gyaru, with big hair, big nails, short skirts, and cute looks. However, the style does add some unique features, such as more sexy and revealing clothing. However, although the style is sexier, it is always done in a classy way.

Agejo style prominently features sexy items such as lower cut tops, sexy stockings or garters, or even the use of lingerie items, such as silk babydolls. [1][3][4] 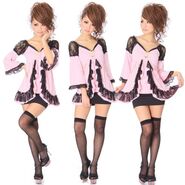 Source Unknown
Add a photo to this gallery

Retrieved from "https://j-fashion.fandom.com/wiki/Agejo?oldid=7199"
Community content is available under CC-BY-SA unless otherwise noted.